Importance of Thruster Power on Underwater Drones with a Claw 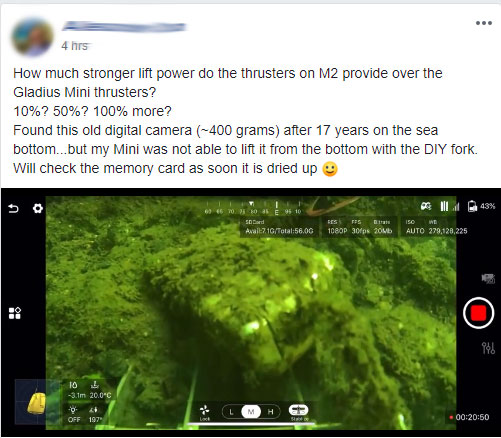 After seeing a recent post on the Chasing Facebook Group about picking up items from the bottom with a claw, I think some underwater drone hobbyists don't realize that having thruster power isn't as important as they would think. For instance, you won't be using the thruster power to pull items from the bottom of the lake or oceans. Instead you'll be using the strength of the tether and connection point, both the Chasing M2 and Fifish V6 connect to seperate strong points instead of the traditional screw point so you don't have to worry about weakness.

For instance on the Fifish V6s, the tether first screws in, then wraps around the plastic handle which is part of the main shell of the body. With the Chasing M2, it looks like the tether wraps around a smaller handle, now is that smaller handle just as strong as the big handle on the V6s? I hope so... As you can see in this video, the V6s is able to pull a 10kg kettlebell right off the bottom of the pool, that's pretty darn impressive.


For the past couple of years a lot of underwater drone hobbyists and reviews sites were claiming that having more thrusters is going to increase stabilization and was the most important aspect on an underwater drone, now that we're up to 8 thrusters with the M2, I'm not so sure those extra 2 thrusters are going to make that much of a difference in stability. As I've been seeing a little shakiness in some of the M2's videos, now hopefully Chasing can solve that issue with a few software updates in the future. My point is, those two extra thrusters may not be important as you think they are since the Fifish V6s has 6 and can do the same omni movement as the M2. You now have to be concerned with battery power on the M2, sure you have replaceable batteries on the M2, but lets say you're following school of manta ray around, then all of a sudden you fall short of battery power... You basically lose that shot right? Something you have to consider, considering the Fifish V6s battery lasts 6 hours in a single dive now.

I was so gung-ho with the Chasing M2 after seeing it at the 2020 CES trade show, but now after seeing various videos of the Fifish V6s in action and rethinking the 8 thruster ordeal, I'm just gonna wait it out before I purchase the M2 or any other drone. I want to see more comparison videos between the V6s and M2, I think there's going to be a lot of debating going on, so much to factor in!
Last edited: Aug 8, 2020
You must log in or register to reply here.
Top